Ladies and gentlemen, I have a confession to make, in case you haven't noticed already: I'm a little reticent about building decks. I've only posted two on this blog, one of which was made by someone else.  I have a few thousand cards. Why not make use of a few?

Well, why not, I say? To that end, I will be constructing decks much more frequently and posting them here in the future. Leading up to that, we have a summary of my two decks as they stand (excluding Javi's deck that I have, which he made and I take no credit for, you doucherocket).

Here's the old Green deck, tuned up to the point it can play against almost anything: 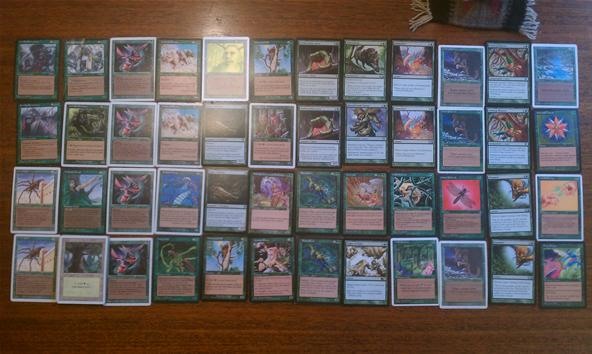 And here the newest member of the team: a White and Green deck inspired by my corresponding Gold cards: 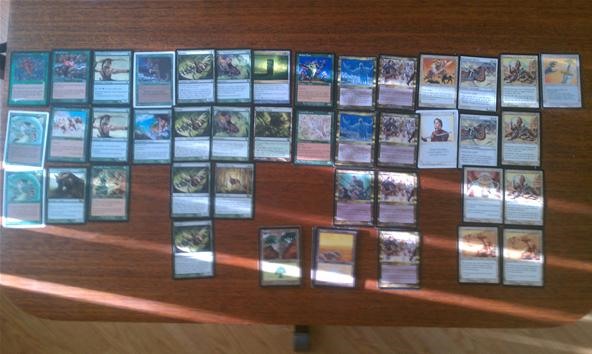 Let's discuss! The Green deck is the same Green deck I wrote about before, but after about seventeen more revisions. It is now, I'm proud to say, really damn powerful. It doesn't lose much, mostly due to the fact that all the revision has prepared it, at least somewhat, for a vast variety of MTG contingencies:

It's played very well against every deck I've used it against, even though it only has 20 lands! The Mana elves more than make up for it, and I've yet to want for Mana playing with this deck. If anyone has any problems or suggestions for it, comment!

And now on to the newer deck, the Green-White. White is definitely subservient, used more for an army of Clerics and getting my Gold cards out than for any particular strength of it's own. The deck is designed to overrun people.  It has a gang of creatures and very little else really, so getting them around and through the opponents defenses is key. As yet, this hasn't worked very well.

Last night this deck got me into the first MTG game I've ever called a draw. Lee and I were playing, him with his Blue deck, and it was the most boring game ever. I had a ton of creatures, he had three Propagandas and few creatures, but cards that tapped and / or unsummoned all of my creatures continually. This meant I had to spend all my mana every turn getting my creatures back out, and then he spent all of his unsummoning them again. It was annoying, went on forever, and eventually led Lee to leave and go watch Jersey Shore.

In other words, this deck needs work. It needs to be sneakier and have more way of getting around defenders. It needs way to destroy spell cards, it only has one Disenchant as it stands now. It's still new, so we'll see how it turn out.

Maybe the least fun game ever.