I started playing MTG in 1994, the same year that the Fallen Empires set hit the market. It was, in fact, the first new set released after I started playing, making me one excited nine-year-old. I harangued my father, he took my friends and I to Gameworks again and again, and the booster packs started to mount. The problems only started to occur once we got them open.

This set sucks. I'll get that out of the way first. Sure, some of it's cards are sneaky and they play better together, but who wants a whole set of these things? There are few strong creatures, few devestating spells, and even few interesting pictures. You know an MTG set is weak when the best part about it is the story, which many players (myself included) have rarely thought about. The only unique card from the set that has lasting appeal is Hymn to Tourach: 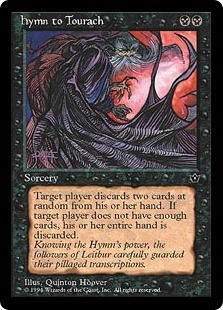 A common so powerful it was never re-released and has become the most valuable card in the set at $2 NM (Near-Mint). $2. This card is worth less than most sandwiches.

Most of the set consisted of weak creatures designed to completment and quarrel with one another. Take this guy: 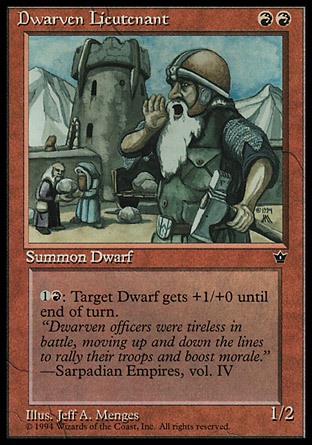 I have at least four of these, and they are among my least favorite creatures in the history of MTG. They're weak, their ability is too expensive, AND it only works on Dwarves. I have never seen a Dward deck, and that's what you'd need to make this bad boy worth anything. Really, that's the problem with this set in a nutshell: it plays terribly with other sets. Even it's most powerful rares mostly rely on the commons unique to the set in order to thrive. To whit: 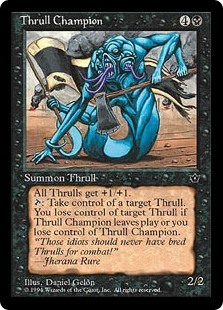 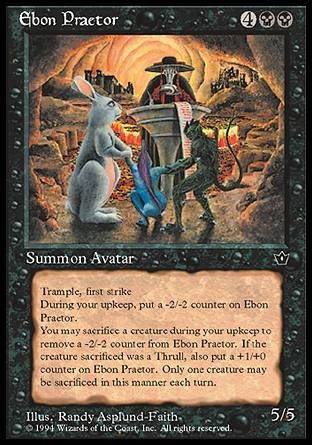 Both potentially awesomely strong cards. The problem: both require you to have a deck full of Thrulls to work. Thrulls? There's a reason they were only in this set. They're boring to play with, and no one wants a whole deck of them.

The cards aren't worth anything and they don't integrate well into the game as a whole. If you have a lot of Fallen Empires cards you can make some powerful decks out of them if you use them all together, but in light of the awesomeness of future sets Fallen Empires is little more than a relic today, and my least favorite set that I have any experience with.

If you want to defend Fallen Empires, stoke my ego by agreeing with me, or ignore this completly and opine on your own favorite and least-favorite sets, head on over to the forum where there is a thread dedicated to just that.