Before last Sunday I hadn't been to a proper game store since I was in middle school. Over ten years ago. If you decide to stop reading right now because I obviously don't care enough about MTG to be writing this thing, I don't blame you. But I tell you, friends, as someone who has denied the utter awesomeness of their hobby for too long, that going to Emerald Knights in Burbank made me feel at home. I want to tell you about it and explain why I will be back many times in the future.

Game stores are the temples of MTG and dozens of other awesome tabletop games. Be they board, pen-and-paper, card, or miniature war. Depending on where you live they can be massive places or tiny holes-in-the-wall (what I've noticed when I've seen them around LA). The latter are not very inviting, but the former most definitely are, and Emerald Knights is that. It's a two-story room with a balcony around the top holding easily 20 game tables. The main floor is mostly shelves of games and game paraphenalia. I was drawn first to the impressive board and miniature war-games section, where all my money could easily disappear in a day if I wasn't careful. I pried myself away with self-promises of more research before the fiscal spluge, and went around the minatures case to the case of rare MTG cards. Thence I  received a Rofellos, Llanowar Emmissary from (courtesy of my lovely girlfriend). 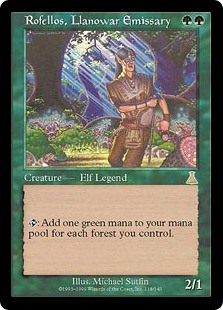 Yes, ladies and gentlemen, the king of the Mana Elves. He doubles your forests. Meaning you can get out mammoth creatures twice as fast. And kil people twice as fast. HAAHAHAHAHAHHAHHAHAHA.

I admit that I was a little disappointed that the case and the packs of new cards behind the counter appeared at first glance to be the extent of their MTG card selection. I had drifted over to the comic book corner, which was quite well-stocked if a little too disorganized for the tastes of my comic-connesseur / lending-library friend Greg and snagged the first two Scott Pilgrim books (I'm always off on style by a few years, forward or back) before I saw them.

On a rather unassuming waist-heigh bookshelf near the small cluster of main-floor game tables lay boxes and boxes of pristine Magic cards, 10 cents a pop, sorted by color. I almost cried, and spent 20 mintues rifling through the Greens in a rapture. I limited myself to Green because my main deck is Green and my companions were already done shopping and I didn't want to keep them there until dark. I grabbed every card I wanted from the maybe 600 I looked through and got them for less than three dollars. It was only as I was paying for the cards and comics that I noticed the 25 and 50-cent card racks, which I will also be ransacking when I come back with my MTG stalwart neighbor and fellow World member Lee Mills this weekend or next. Soon, at any rate. I've got the itch.

Which brings me to the point of all this. Millions more people played MTG at it's height in the 1990's than do today. Most of those people, like me, proably didn't move on to other games but to other things entirely, perhaps even as I did casting scorn on their former hobbies in a misguided stab at coolness. Well folks, I'm here to say no more! I'm ready to dive into nerddom more unashamedly than ever before, not giving up the other interests I've acquired in the intervening years but not denying the old ones either. So to all of you who don't think games are worth your time, that you're too olds, that your friends will laugh, or whatever your reason for pretending you don't like games is, go to Emerald Knights by yourself. If you're not in LA, find a like-minded shop in your town and go there. See how it makes you feel, and if it makes you feel more youreself than you have in a while. I'm glad I did.