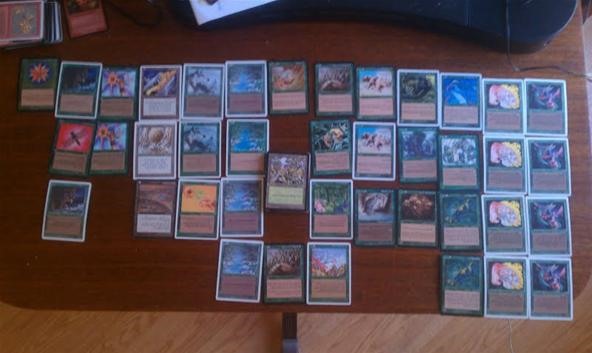 Here, ladies and gentlemen, is my main deck. The youngest card in it was printed in 2000. It makes me feel a little crusty and old for one of the first times in my life. But it does mob pretty well against all of the mostly pre-2000 decks I've played it against (none of my friends really have new cards either) and I'll tell you why:

That means that I have immensely powerful creatures who I can always get out, keep from dying, and oftentimes bring back when they do die. It's about to get a tuneup to make it a little more resistant to spells and much better in my opinion, but I haven't tried it out that way yet so I wanted to get this up with the deck as it has been for 20 matches or so. Here's the roster:

2x Gorilla Chieften (I like 3/3 creatures that can't die)

1x Gorilla Berserker (had 2 the other day, not sure where the other one went. I love that card. Ugh.)

2x Blastoderm (inserted to kill blue, have been great for everything else too. I might buy more.)

2x Crash of Rhinos (I love the face people make when they work so hard to kill the first one and I summon the second one.)

1x Overrun (Oh my God ye, this card was made for this deck)

2x Aspect of Wolf (I always have a ton of forests, so this card rocks the house)

1x Black Vice (great if you get it early, almost worthless otherwise. Might remove)

1x Joven's Tools (probably coming out of the deck soon, costs too much and i like using trample more)

Yeah that's right, it's a little fat. The tuneup will be good for it. Less forests, a couple other random things removed, and all kinds of versatility added. I'll describe that later, perhaps even on the next episode of Deck Diatribes.