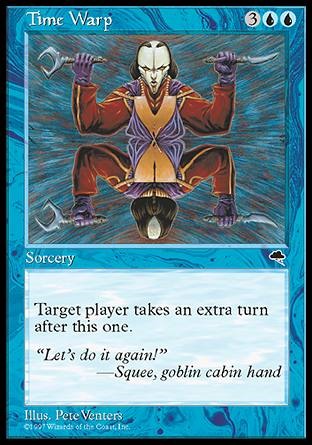 Does the above card seem a bit unfair to you? I see that Bacheeze has already poisoned your minds with his anti-blue propaganda. These are the words of one who has had his 7 mana-Force of Nature Unsummoned one too many times. He seems to think that those of us who play blue are all a bunch of malcontents who deal with our misery by spreading it around. This is entirely true.

Boy is it fun though. For a true connoisseur of the game, blue is by far the most rewarding and entertaining color to play. It doesn't have the speed of green or black, the offense of red, or the defense of white, but it does have what our illustrious administrator calls "negation." The rest of the world calls this "control" magic. I have also heard people refer to it as "permission" magic. The reason for this is that many of blue's trademark spells and effects are played during the opponent's turn. A very good blue player armed with a decent deck will dictate to an opponent what he can and can't do during his turn.

As you might imagine, this is very annoying for an opponent. And as your smug, self- satisfaction and obvious bemusement at your opponent's misfortune increases with every Counterspell, so does his anger. A weaker opponent will often have his ability to think-clearly compromised because of this. Which brings me to one of my favorite Magic cards of all time: 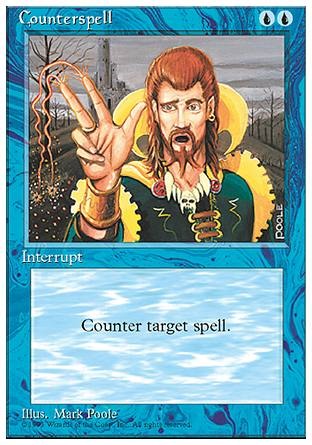 Few cards enrage one's opponent as readily and as often as this guy. For the best effect it should be used as smugly and as often as possible. Be sure to let your opponent know how much you are enjoying his inability to play his Breeding Pit; necessary to keep the Lord of the Pit fed and happy with a steady supply of delicious babies. You wouldn't like the Lord of the Pit when he's angry.

There are a couple of other things that I love about this card:

None of this actually hurts your opponent in the game, but rest assured, you will be taking your toll emotionally. A lot of blue decks claim to win by running you out of cards, but unless it's one of those Urza's Saga-era time spiral nonsense decks that does this very quickly, the truth is quite different. This is how it goes down:  the other guy gets pissed off, gets up and calls you an asshole, then leaves. You win.  And that's the whole point of playing blue: winning by being a complete asshole and having no friends.

i knew a guy who used to play like this. i once saw him piss one guy off so bad, the guy reached over the table, and punched him in the face.

Lol! I would have liked to see that.

I was tempted last time we played Javi.